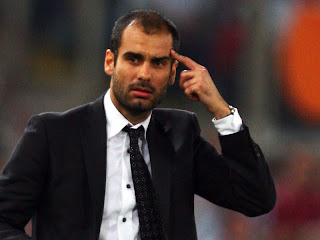 So, on friday the inevitable occurred same I AM GREAT WITH OR WITHOUT YOU predilection of barca managers Gourdiola a manager who undoubtedly lead barca to the greatest exaltation of their entire history stepped down form the job leaving a wandering and somehow neurotic barca fan base.
The guy took over this demanding job from frank rijkaard a celebrated barca manager who guided them to greatness and somewhat laid the bases of this barca team which WAS regarded as the best side of world (i used WAS coux i think that barca days are over) inducing messi,ronaldiniho and the rest of barca stars.what guordiola did?he just took over and then developed them to somehow invented this PASSING style.if you see his signings namely ibrhamovic he paid 56 m and the guy didnt clicked later on replaced by villa.the titles that barca won the credit mostly goes to the match inclinating players who worked hard under his command.the thing that barca inherited by him i would go with contemptible fouls and meaningless dives that helped barca win many matches.

Now going with the title of blog somehow no one can tell why he left barca.Only reason the guy came up with is not bieng able to live up to the expectations of board which is trophies come on dude you gave them so many trophies they can hardly coup up with and every single barca fan would never want him to resign yet he left with a lame smile.The reason i came up with is apprehensiveness let me explain There are two ways to get to greatness in this game FERGUSON'S way and MOURINIHO'S way.MOURINIHO's way is to prove yourself around the world the guy managed porto then chelsea then inter milan and he was acknowledged as the best and when he was at the top he joined the worlds biggest club.then there is the FERGUSON's way the guy was talented took over manchester and made history in the clubs football history.Now where is guordiola going i let you decide.
Guordiola is one of the highest paid managers of the world but the greed towards the highest paid let to this surge.reports are that guordiola's deal with chelsea would make him the highest paid manager in the business anyhow lets see if he can make things work like barca he'll surely be among the greatest managers of all time lihe ferguson,mouriniho,del busquet....but if not i guess he'll be managing some inconsequential club or national team like his predecessor frank who is managing saudia's national team.
GREATNESS or CURTAINS wait and watch!!